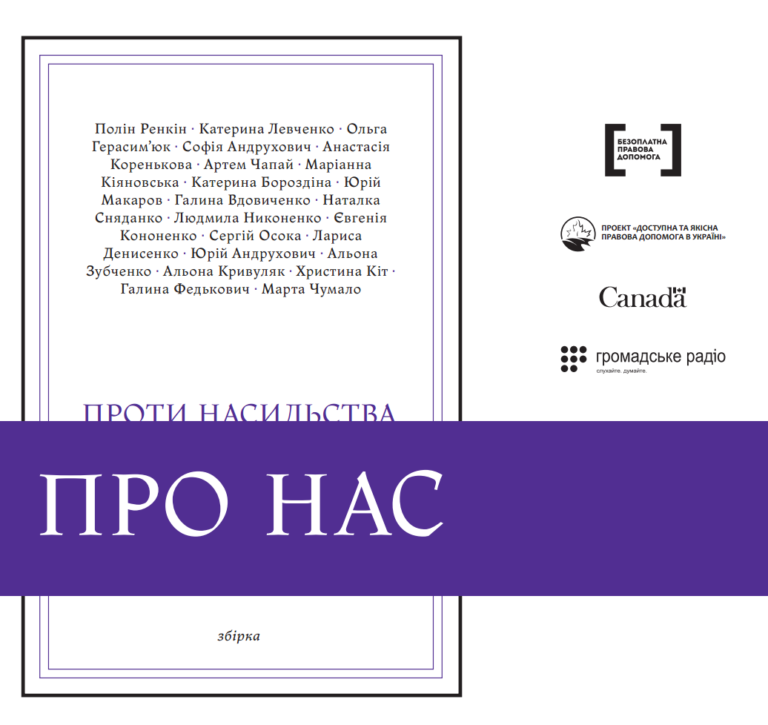 On December 16, a presentation of the collection  “cONtra abUSe” (“PROty NASylstva”) — a literary social project aimed at highlighting and combating the problem of domestic violence — took place in the Ukrainian Crisis Media Center. The collection is a part of the literary, media and human rights initiative, implemented by the Hromadske Radio with the support of the Canadian Government in the framework of the Quality and Accessible Legal Aid in Ukraine Project.

“This collection is first and foremost designed for Ukrainians, but the topics in it are universal for the whole world. This project is unique as it united professional writers, psychologists, social workers, and lawyers who together created a package for reflection on human rights and dignity”, informed Roman Vashchuk, the Ambassador of Canada in Ukraine. 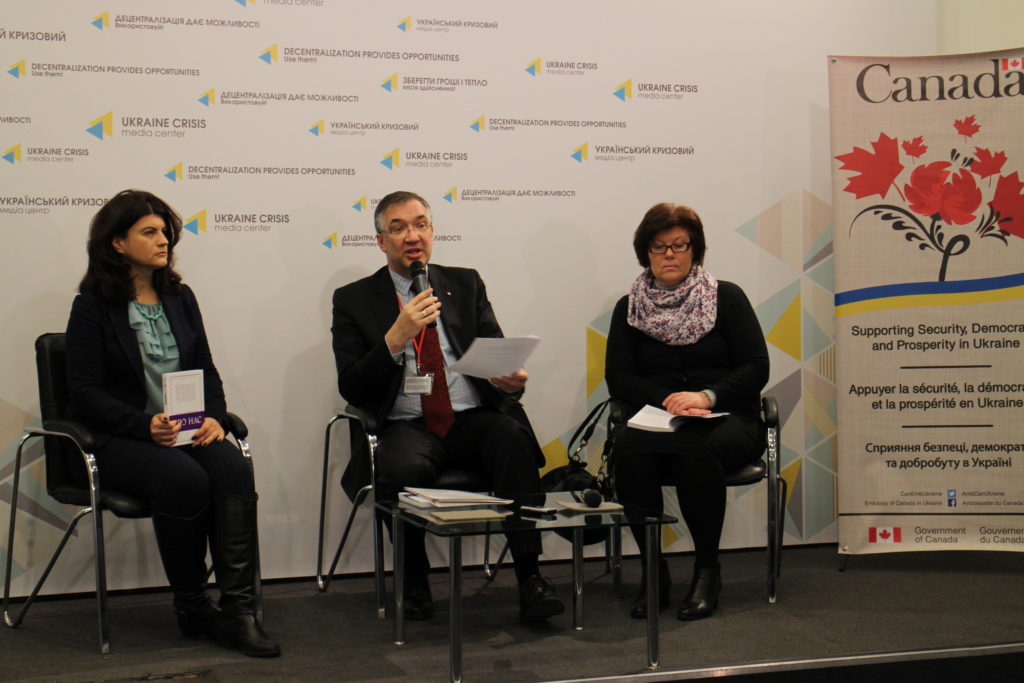 Mr. Ambassador cited data of the World Health Organization stating that 30% of women across the globe experienced physical or sexual violence, while in Europe, domestic violence was a frequent cause of death among women aged 16-44.

He noted that protection of the rights of women and girls was the priority of the Canadian foreign policy. As he informed, there was a Status of Women Canada Department, and based on the latest statistics, the level of domestic violence in the country was decreasing.  Similarly, the protection of the rights of all citizens, regardless of their gender identity, is also a priority for Canada.  This is why, according to him, the publication of such a collection was supported by the Canadian Government in the framework of the Quality and Accessible Legal Aid in Ukraine Project. He says that this collection, among other things, is designed to urge people to think about the problem of violence and combat it.

“I hope that this book, as well as private reflection of its readers that it may evoke, will facilitate in this noble cause”, said Roman Vashchuk.

“Unfortunately, figures never reflect actual scope of the phenomenon. According to our estimates, police statistics accounts only for 10-15% of actual violence cases in Ukrainian families”, said Kateryna Levchenko, author of the preface to the collection and President of the International Women’s Rights Center “La Strada Ukraine”. 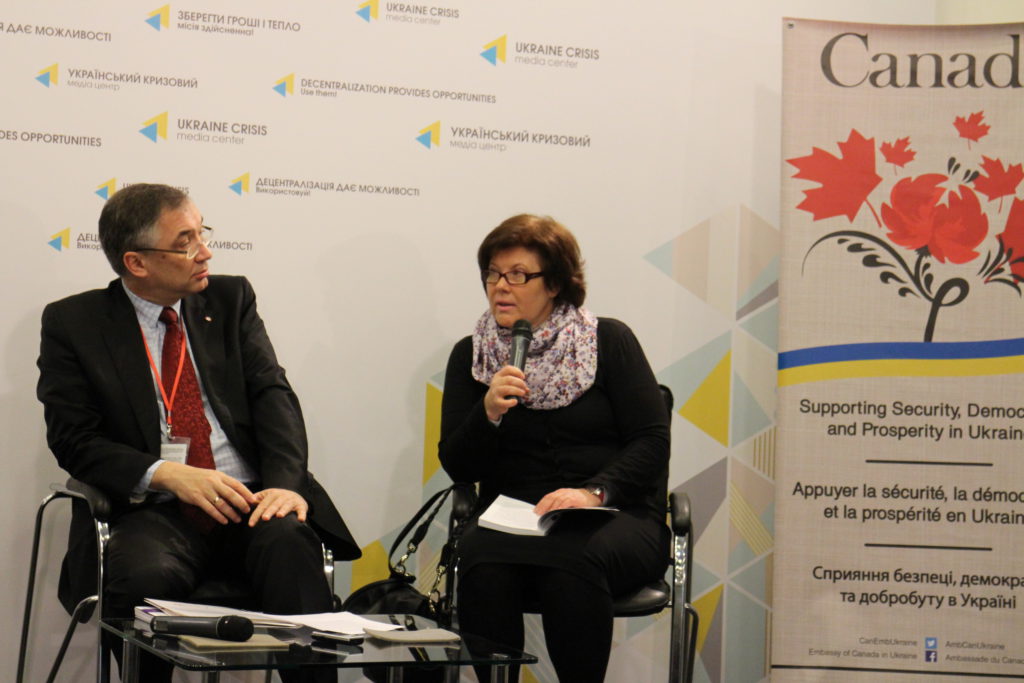 According to her, the statistics of 24/7 hotline “La Strada Ukraine” shows that in 2016 only, 30 thousand appeals were recorded, 70% of them being cases of domestic violence.

According to Kateryna Levchenko, ratification of the Istanbul Convention was just one step, while Ukraine actually needed to climb the “high mountain”, as implementation of all convention provisions would be the most difficult. She is convinced, that it is critical to start changing attitude of the society to the issue of violence, try to form non-violent behaviour models. It is also important to avoid concealing this phenomenon, but rather “break this circle of silence”.

“Visualization of the problem is absolutely necessary to overcome it. This book is such visualization for me. In addition, literature makes it possible to communicate with a wide readership. “In this regard, the publication of this collection is very important”, she noted. “And for us, as the staff of women’s rights organization, it was very interesting and honourable to work with the authors. First of all, this cooperation enriched us profoundly by opening new approaches to our work”, said Kateryna Levchenko. 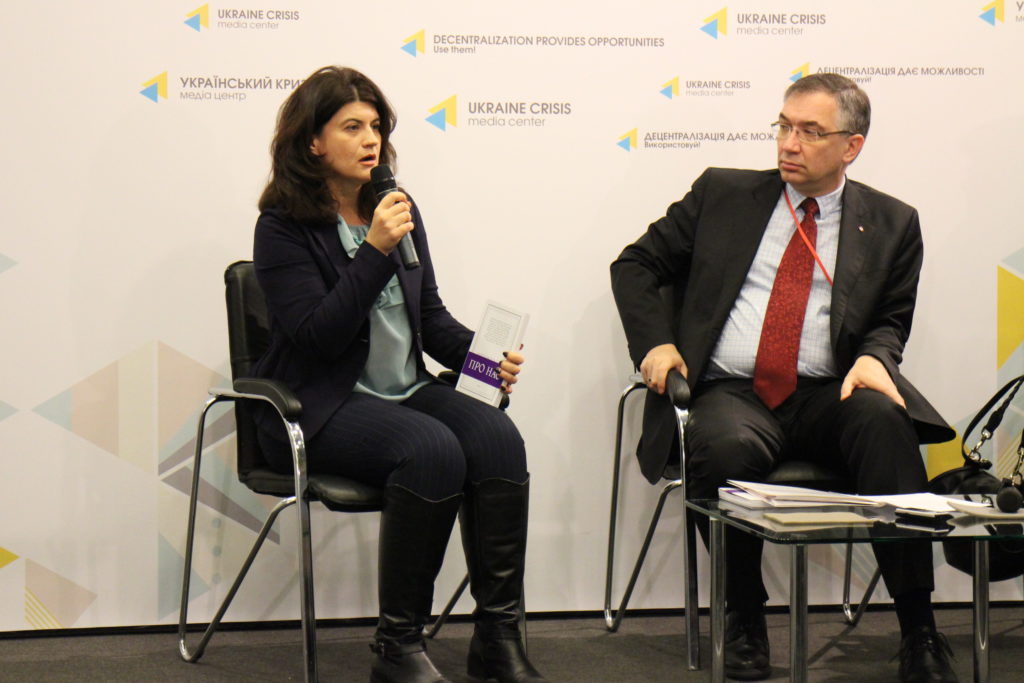 According to her, the collection is practical because it contains comments of expert psychologists from “La Strada Ukraine” in the end of each story. In addition, this collection contains legal advice and even samples of legal documents, including samples of police reports, which may be useful for people who experienced violence and all those who are aware of the facts of violence towards other people.

“For me as the collection compiler, it was important to expand the circle of people who could safely communicate the problem and combat it. Very often, people themselves do not know that they are using violence nor are persons against whom the violence is used. These are common traditions being practised in the families for years, and people just cannot leave this circle and don’t know that there is a way out. Though situations described in these stories are fictitious, they are easily recognizable and to my view, they are described very psychologically.  Someone may recognize him/herself and receive advice on how to act in case of violence against them”, said Larysa Denysenko. 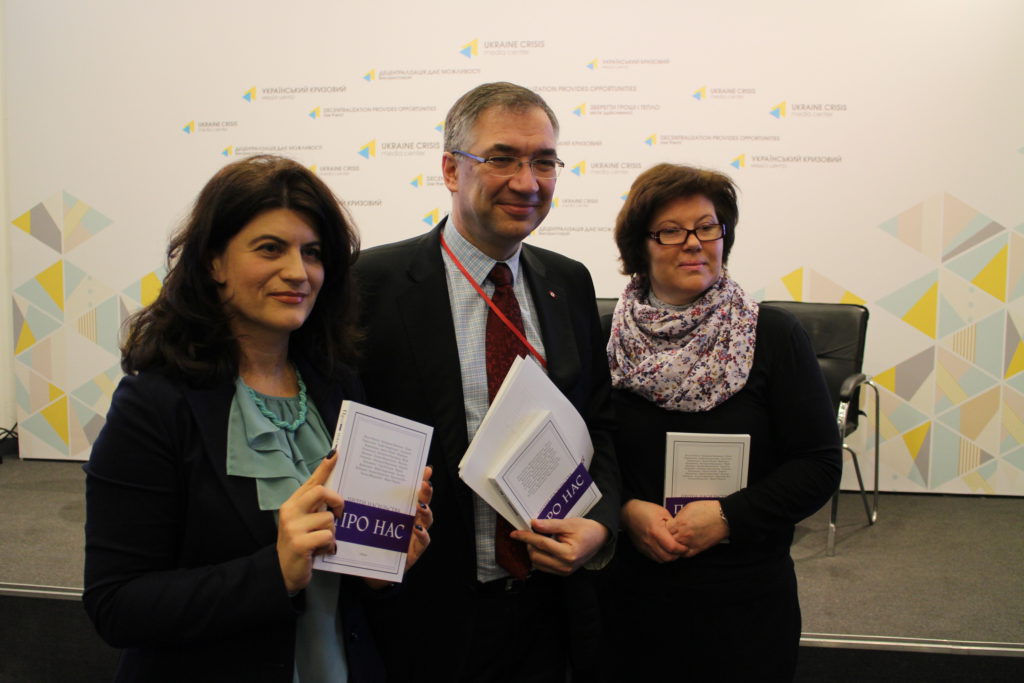 “cONtra abUSe” collection is “ON US”. It is also for those who have become or may become a victim and/or witness of domestic violence, for people who are not indifferent to this problem, for those who can and want to help, influence, and support. Among other things, it is designed to make people using violence think about its devastating force.

The collection will be distributed to free secondary legal aid centres where it may be reviewed by both clients and centre employees working directly with people coming to these centres. In addition, already next week, it can be obtained free of charge at the office of Hromadske Radio located at the address: 16 Khreshchatyk Street, as well as in the offices of “La Strada Ukraine” Women’s Rights Organization.

Electronic version of the book can be viewed here.

You can view the full video of the presentation in Ukrainian and English.

“cONtra abUSe” is a new media human rights project implemented on Hromadske Radio with the support of the Ukrainian-Canadian Project Quality and Accessible Legal Aid in Ukraine. For instance, the “Gene of Justice”, a special series of weekly programmes, was aired on Hromadske Radio; it was dedicated to various issues of legal aid in Ukraine and designed to inform the society about the right to such aid and ways of obtaining it. As a part of this series, over 60 thematic podcasts have already been recorded (view and listen to programmes); new podcasts in the framework of the “Gene of Justice” are planned to be recorded further. In addition, with the support of the Ukrainian-Canadian Project, a media project “Combating domestic violence” is being implemented on Hromadske Radio, aired twice a month and targeted at people suffering from domestic violence or witnessing it, for those who need help, including legal help, and for those who are not indifferent and can help (view or listen to the programme).